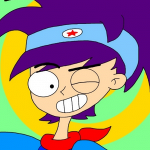 As of 2015, I've been an admin in the Greeny Phatom Wiki, the wiki that is now back from the dead.

Hi, this is Gabriel Garcia (also known as MinionsYesCarrieUnderwoodNo, MYCUN, Geoshea, ToonLinkMinions11, Gabe, and Geosworld2011). I'm one of the admins in the Greeny Phatom Wiki. I was born on November 29, 2000 and I'm currently 17 years old (I'm going to be 18 in November 2018). As of May 2015, I'm currently a fan of Despicable Me, The Legend of Zelda: The Wind Waker, Ico, Hoodwinked!, Coraline, ParaNorman, Corpse Bride, and Planet of the Apes (definitely the reboot movies). I'm famous for creating fan-made movies, games, shows, etc. I'm also best known for creating my own fan-made movies and shows such as Geo Universal (which includes Geo's World, The Geo Team, etc.), Geo the Creature, The Wacky Pack, and of course, the MYCUN series, which The Wacky Pack and MYCUN both starred myself).

I'm currently using Mozilla Firefox (the internet browser that I'm now using on my computer because Google Chrome is now slow and crap), Paint.NET (to make pictures, fan-made posters, etc), Sony Vegas Pro 11.0 (to make videos, logos, etc), Game Maker 8.0 (to make my own games). Since the Greeny Phatom fanbase has been hatred due to its "crappy animation", I used to hate Greeny Phatom, until now. Today, I now like Greeny Phatom since John Leagsdurg (SkipperThePenguin100) betrayed us for doing that kind of stuff. I first saw Greeny Phatom when I was on YouTube back in late 2009 before I started a YouTube account called geoshea1000100 in December 2010. During the Geoshea Incident when Greecity2011 hacked my third YouTube account geosword2011, I was crying because I don't know what to do. After that, I have created my fourth, new and current YouTube channel called MinionsYesCarrieUnderwoodNo since August 2012. I also hate Carrie Underwood, because she makes bad songs that I hate.

In the summer of 2010, I first made a ROBLOX called Geoshea (the first ever username that I created online) after I check out ROBLOX from 2008 to 2010, until one day when I created geoshea1000100 on YouTube, some idiot hacked my ROBLOX account and took all my Robux because I put my ROBLOX password in a description of my video called "This is my ROBLOX account!" or something like that. In early 2011, I made another ROBLOX account called greenbob761, replacing Geoshea due to being hacked.

I'm currently working on a Windows flash parody, called Windows DE, which is the sequel to my first Windows parody, Windows GS. All of the parodies where made with Macromedia Flash 8, which I'm now using. I am also creating a fan-made movie, called MYCUN: The Movie, which is set for release on December 11, 2015, with a sequel in 2018 to follow. I'm not sure if it's going to be an internet movie on my YouTube channel (like Cayby J did) or just a fan-made movie.

My History of Being Creative

Things I don't care for

Add your own drawings of me in this gallery!

Retrieved from "https://greenyphatom.fandom.com/wiki/User:ToonLinkMinions11?oldid=43884"
Community content is available under CC-BY-SA unless otherwise noted.